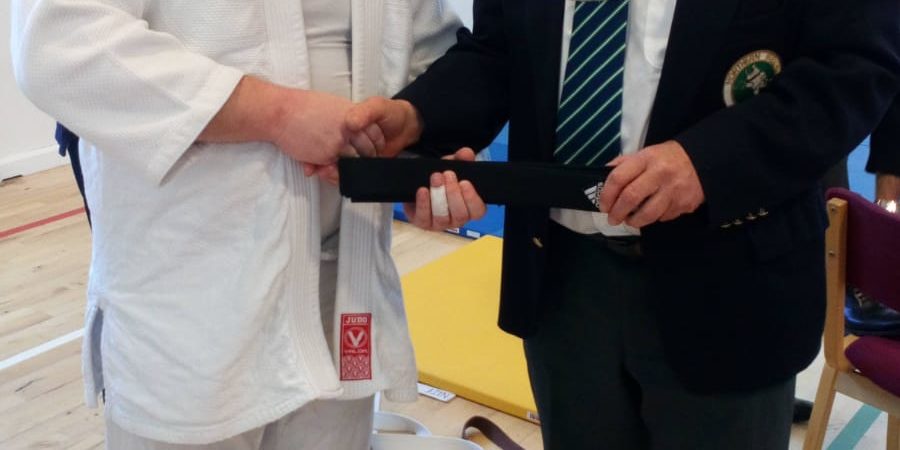 Not only is this a fantastic achievement in itself, but Michael has overcome a lot of personal adversity with illness to get onto the Judo mat, which means he competes and trains wearing a stoma bag under his Judo suit!

Michael was diagnosed with Crohn’s disease in 2004, when Michael we just 18, after experiencing initial symptoms of weight loss, chronic fatigue, exhaustion, a very low immune system, loss of appetite and pain with up to 15 trips to the bathroom daily.

Michael was admitted into hospital late in 2004 when his GP noticed a drastic change in his health and was sent for further intrusive investigations including invasive surgery. This then led to the discovery of Crohn’s disease and a complete bowel resection.

After managing the condition for a while, Michael started at the University of Ulster Coleraine in 2006 where he was introduced to Judo. This would be the moment that through sport he reclaimed some of his lost years through illness.

“Judo for me was like that moment in the Matrix where you are offered the red or blue pill. I took the red pill, taking part in a sport where respect and integrity is at its core.  The emphasis on personal development I prized, and I was engrossed in learning the names, new throws, also finding out about the top fighters.”

“In 2012 my symptoms were starting to return. I had made it to brown belt at this stage, one below black. I competed in several competitions not telling anyone except my wife that my health was failing.”

“The next 6 years would be the toughest of my life. The pain, fatigue and weight loss were at levels I’d never experienced before. In that time, I had over 50 hospital appointments, over 10 operations and medical procedures along with all the different drugs and side effects. It took its toll on us my wife, then girlfriend, a Nurse, 21 years of age looking after me after long shifts in the Royal.”

“We were living in Belfast at the time and we decided to move out to the countryside for me to deal with Crohn’s. While the physical pain was bad, it was the mental anguish of watching my exhausted wife look after me. She had to wash, change, even feed me when I was not up to it. Watching my life pass me by I lost my late 20’s to Crohn’s. There were many regrets, watching my wife work all the time not being able to help her.”

“I had dreams and hopes like all young people, to be a black belt, compete at a higher level, be a History Lecturer, travel the world, have children and at that point seemed like I was never going to get the chance to accomplish them.”

“I got to a point in summer 2017 where my illness had me in a chokehold I feared I would never get out of. All the medication had failed, I was losing weight rapidly, crippled with pain and mentally and physically drained. Somewhere I found the energy to fight once more to live the life I so desperately wanted. We did whatever it took to get well again, with great family and friends supporting me all along the way.”

“A Stoma bag to the ordinary person seems an extreme solution to my illness, and after marrying my wife, to me it was the second-best decision I ever made. It is permanent, I constantly have to make adjustments but it’s a small price to pay to be well. My surgeon Mr Jack Lee can’t believe I am back doing Judo and I can’t thank him and his amazing team enough.”

“When I woke in the recovery room I felt instantly better. The toxic brain fog was gone, energy levels were back. I knew from that very second, I would never live a life with regret. It was a second chance and every day is precious and as long as I take a step towards my dreams each day life would be great!”

“I started Judo again in January this year with a Judo Coaching course, because I thought with the stoma, I would not be able to participate and fight like I used to. Never have I been so happy to prove myself wrong. The past 5 months have been a blast, I fought in the Irish Open, picked up 2 Bronze medals, the following week I fought in the Northern Ireland Open and fought an Olympian and a Commonwealth Games competitor and managed to pick up 2 more Bronze Medals. It was a particularly emotional event for me. I felt a monkey was off my back as I had planned to compete in Northern Ireland Open for the first time in 2013 but could not because of my Crohn’s and being ill.”

“I have finally earned my black belt at a grading where I fought 5 times including a line up, 3 fights one after each other. The emotion of earning that belt was not about the belt itself, it is the intangible respect and integrity around earning it that makes it all worthwhile. I would say to my wife Nicole when I was ill, to keep my dreams alive, if I can do whatever I can to get well again to earn the belt, that would mean all the pain and suffering was not in vain.”

“I am going back to University in September to do a Master’s degree in History at Ulster University Coleraine, returning to where it all began, only now as a black belt to coach the very beginners I once was.”

“This summer I will be competing in the British Adaptive Judo Open. I’m also aiming to compete in the World and European Adaptive Judo Championships and possibly the Commonwealth Judo Championships in September in the Masters (over 30’s) category. I want to be a motivational speaker, tell people my story and help them know that when you are on your back and life has you in a chokehold you think you can’t get out of, there is a way to get back on your feet and fight again.”

“I’d like to thank my coaches over the years, if I hadn’t had them pushing me forward and teaching me, I would not have had something to motivate me to get well. Thank you to Richard Briggs, Jim Toland, Lisa Bradley, Stephen McCluskey, Jonathan Cooke, my wife and of course the surgeon Mr Lee and his team and the nurses on ward 2 South in the City Hospital.”

Judo in Northern Ireland prides itself on being a fully inclusive sport and the fact that training in all clubs can be tailored to individual’s needs.

There’s no pressure to compete and you can just enjoy training in an Olympic Sport that is also a martial art. If you would like to find out more, to get on the mats yourself, you can find your nearest Judo club by clicking here