Last weekend a gala dinner was held in the Crowne Plaza Hotel Nottingham, bringing together the recognised contributors to Judo from across all areas for the Annual British Judo Association Awards. 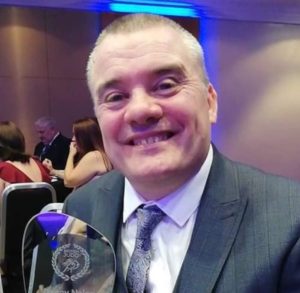 Ranging from Referees to Performance Clubs, there were thirteen categories of which the NIJF were nominated in two.

Danny Nolan was nominated as Community Coach of the Year and Averil Taggart as Event Volunteer of the Year.

Against stiff competition, we are delighted to say that Averil was awarded the Bronze Award for her hard work at competitions across Northern Ireland and the Mainland and Danny was given the Gold Award for the efforts and inroads he has achieved as the Community Coach of the Year.

Celebrations went on to the small hours as the prize winners enjoyed their time in the limelight for all their efforts.

From the Federation’s point of view, we’re delighted to have had two people recognised for what they do in Judo.

With Danny expanding on his coaching capacities and Averil having reached the top level for Technical Officials of Competition Controller there will be plenty of opportunities to showcase their skills in 2020.

We’re all looking forward to seeing it.